To help you out with this, we’ve prepared a quick guide on everything you need to know about security cameras. This guide will include the uses of spy cams, the different types, and our recommendations for hidden security cameras that you can use for your home.

Why Invest In Hidden Security Cameras?

Before anything else, it’s important to understand why anyone would install hidden security cameras in their homes in the first place. And while there are countless reasons for doing so, we’ve boiled them down to three main reasons to simplify things.

According to a study conducted by the Pew Research Center, a majority of property crimes that occur in the United States go unsolved. It goes without saying that a hidden camera will help improve these statistics. This is especially true if the potential criminals are unaware of the presence of a camera in your home.

Having spy cameras with night vision can help identify the criminals in case of the unfortunate circumstance that your home gets broken into. A hidden camera, where it’s out of one’s field of view, could also lead to them being careless. This increases the chances of them revealing themselves when you review your video footage.

Sometimes, you have to put other people in charge of your home. Whether it be a house sitter or a babysitter, it’s not easy for homeowners to trust strangers. This is where in-home surveillance can be quite useful. Nanny cams and other types of cameras in the living room or other areas can help you observe your space when you entrust it to others.

With that being said, you may want to consider letting people know that you have a camera system in the house. The one thing you have to remember is that safety is the main priority when it comes to making use of in-home surveillance. It’s not about catching someone in the act, but creating an overall safer space.

The most important aspect of home security is being able to monitor your space. Given the technological advances, a spy camera can let homeowners keep an eye on their space wherever they are in the world. This level of access goes a long way when it comes to putting the minds of homeowners at ease.

This introduces a whole new degree of access, as homeowners can view their hidden camera recording through camera records from a memory card, or through Wi-Fi, via cloud storage technology. In fact, most camera features even allow the owners to view the feed via their mobile device.

Now, there are several types of hidden cameras you can use for home security. These cameras vary greatly when it comes to how they blend in with the environment and stay hidden from sight. So much so that some of them seem like they’re better suited to be used by super sleuths than humble homeowners.

Nanny cameras are hidden cameras mostly used by homeowners who have children. This is often used to monitor the safety of the child when they’re with their babysitter or nanny while the parents aren’t around. Considering the nature of these cameras, they tend to blend in with the environment of the child’s room.

This is why some nanny cameras tend to look like toys or items that can be commonly found in a child’s room, such as a wall clock. In fact, the most popular nanny cameras come in the form of stuffed toys. This may seem a little unprofessional, but these hidden cameras come with high video quality to give parents the peace of mind that they deserve.

The smoke detector camera is a popular choice, as they tend to blend in rather easily no matter where you put them. As the name implies, this type of hidden camera is built into a smoke detector, and can fit in either a home or office setting.

This dual-purpose device is a great tool for home security. Considering they’ll be placed on the ceiling, these hidden spy cameras come with wireless functionality, which allows you to access the footage through its microSD card or the WiFi.

The standalone hidden camera is perfect if you want a no-frills hidden camera that can fit in any and all settings. Due to their flexibility, this can be used as a substitute or alternative to both of the previously mentioned camera types.

This type of camera is often small enough to be hidden in plain sight. Given its size, this type of spy camera is usually battery-powered or feature an inconspicuous power cord. While this may not be the most hidden of all the camera types, it will get the job done if placed in a strategic location.

If you’re looking for a nanny cam, you’ll want something that is the perfect combination of form and function. This is what makes this spy cam one of the best options when it comes to nanny cams. To the untrained eye, this camera is no different from any other toy that would be in a child’s room.

This camera has a multitude of features including motion detection recording, HD video resolution, and an impressive 16-hours of battery life. All footage from the camera will be recorded on an SD card, which you may then review on your computer.

Given Evertech’s reputation as one of the best and reliable brands when it comes to domestic security products, it’s not really surprising that the Evertech Color Smoke Spy Detector has made it onto this list. When it comes to installation, this camera puts accessibility and ease of use first.

Just install it as you would any normal smoke detector and you should be good to go. What’s great about this is that it’s able to record video and detect smoke at the same time. This efficient device also lets you connect the video feed to a television or computer, and its features include high-quality video recording and audio recording.

However, it also lacks night vision — a crucial component of any security camera. But so long as it gives you the results and information you need, we’re sure this is a good option for you.

When it comes to standalone hidden cameras, the Puoneto is one of the best products on the market. It gives you high-quality recordings, motion detection activation, and smartphone integration all in one tiny device. Its size also lets you put this spy camera anywhere in your house, without drawing too much attention to it.

This spy camera is best used with its smartphone app, as it lets users view the footage on the camera wherever you are in the world as long as you have access to WiFi. One downside would be its 6-hour battery life, but this can be counterbalanced, as this hidden camera is motion activated and has a rechargeable battery.

That’s basically all you need to know about spy cams and hidden cameras. If you have any more questions about spy cameras, don’t hesitate to reach out and comment below! 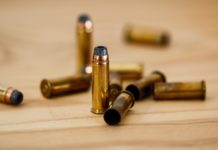 Do Bullets Expire? Here’s What You Need To Know

How Does A Motion Sensor Work

How To Wire A Motion Sensor To Multiple Lights

Can You Put A Gun Safe Upstairs – Storage Tips For...

The Best and the Safest States to Live in 2022